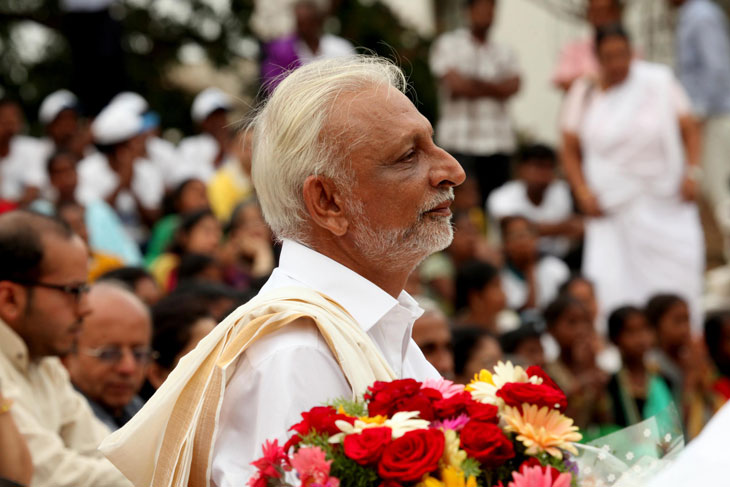 God is one and the same—seemingly different depending on the language and states of mind. Once we have the spiritual knowledge, we realise what everyone seeks is the same thing though the names may be different. We don’t need to change our beliefs in order to understand this underlying, unifying Truth.

There’s an interesting story about four thirsty people who went in search of water. The four people from different places spoke four different languages—for water, one called it ‘Jal’, another ‘Water’, the third one ‘Paani’ and the fourth one ‘Thannee’. Trying to converse with each other, they didn’t realize all of them were thirsty and wanted the same thing to quench their thirst. Quite soon, they were fighting over where to find what they thought were different needs. At this point, a fifth person who understood their needs came into their midst and guided them to a nearby lake. Seeing the water, the four stopped bickering and ran to the banks, drank the water together and quenched their thirst.

I find this parable interesting because it explains God so well. God is known by different names—Allah, Christ, Krishna and so many of them. Despite the different names, God is one and the same—seemingly different depending on the language and states of mind. Once we have the spiritual knowledge, we realise what everyone seeks is the same thing though the names may be different. We don’t need to change our beliefs in order to understand this underlying, unifying Truth. Let us remain different so far as our belief, caste, and rituals are concerned; like a garden with myriad flowers—roses, jasmines, lilies and many other flowers blooming in total harmony.

The Rig Veda, which is more than 2000 years old, says ‘Ekam Sat, Viprah Bahudaa Vadanti’ meaning ‘The Truth, is One. The wise call it by many names’. Along the course of history, many seers and wise ones have shown us the way to that one Truth, albeit in different ways. In all these paths, these wise ones have demonstrated that love is the paramount emotion underlying all spiritual progress.  This truth gets forgotten sometimes when we behave and act like horses with blinders. There is no sense in bickering with each other, because the Truth is one. A century ago, Swami Vivekananda, the great saint and philosopher, said: “All differences in this world are of degree, and not of kind, because oneness is the secret of everything.” When everyone realises that the Truth they are searching for is one and the same, what remains is to drink in the joy of knowing this obvious Truth.

All rivers flow into the mighty ocean, though they originate in different places and flow through different regions.  The spiritual journey is also similar—paths are different but all of us travel towards the one Ultimate Truth.  The realization that the Truth is one opens up a chance for us to be united, despite our differences. I am sure, once this realisation sets in deeply, our society will regain its lost glory and once again become the destination where people from all over the world came in search of knowledge and truth.