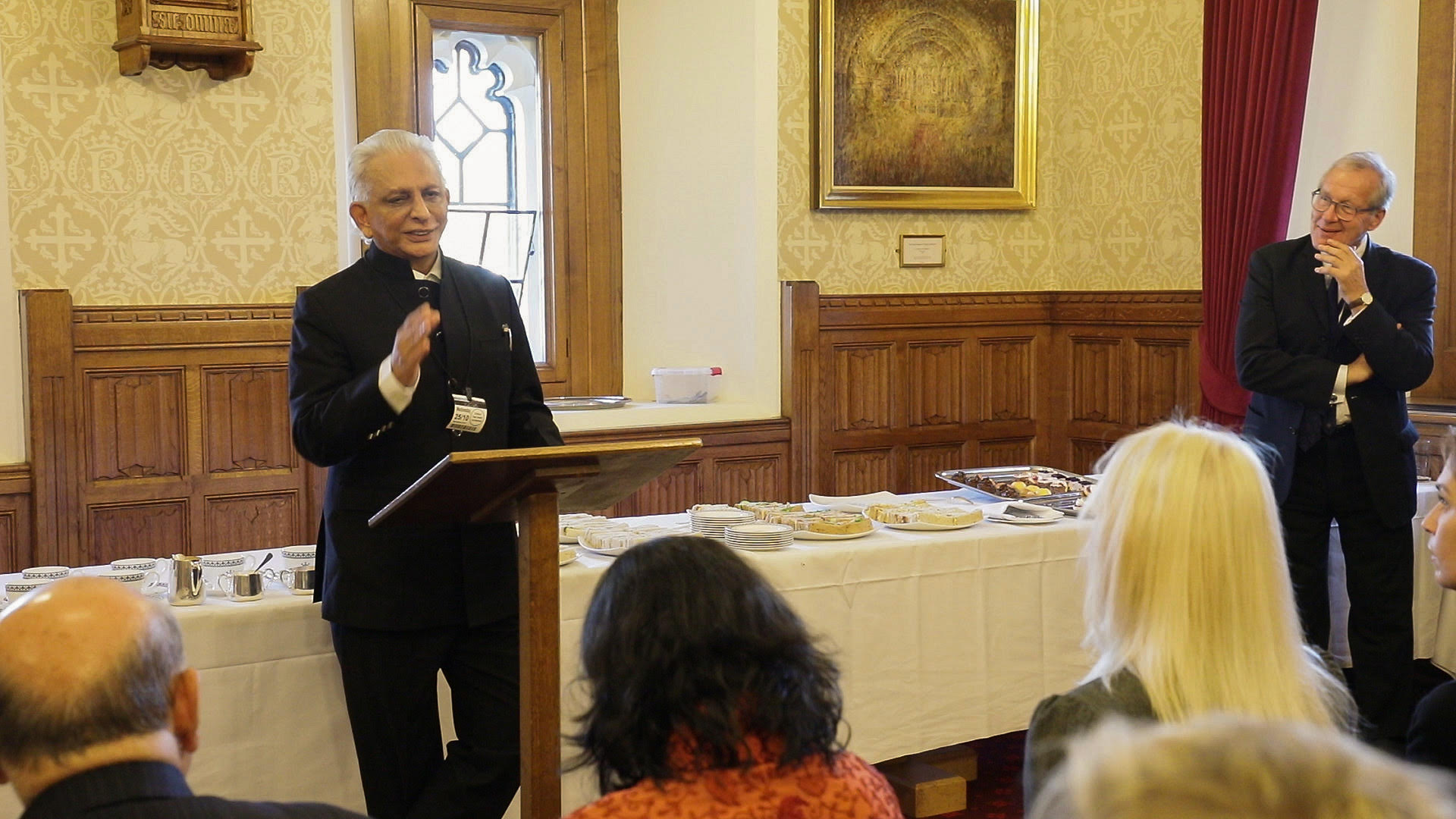 “In the small drama between life and death, why would we fight with each other on the basis of caste, creed, religion?” Sri M asks.

The yogi was in London last week to give teachings at the Nehru Centre, West Drayton, and lead a Walk of Hope in Birmingham. He also gave a talk at the House of Lords. “We are all ONE. We are born from a mother’s womb and will return to the dust of the earth.”

He elected to be known as M, for Mankind, and for Manushya (human being, in Sanskrit). It also happens to be the first letter of his two names.

He was born into a Kerala Muslim family and named Mumtaz Ali Khan. His guru, Baba Maheshwarnath, gave him the name Madhukarnath when he was initiated into the Hindu Nath sect. At the age of 19 he had secretly left home for the distant Himalayas in search of a yogi, and after a gruelling search, he met his Master. Later, respectful friends added the honorific Sri. “Sounds better than Mr M, which is too James Bond!” he laughs.

Human beings are sufficiently evolved to be able to find more important issues to discuss, and to live in peace with each other. Sri M drove home the message with his extraordinary Walk of Hope from the southernmost tip of India to Kashmir, covering 7,500 km over sixteen months, through 11 Indian states.

Divide and rule is an old policy and the ‘religion of the kitchen’ not only creates divisions, it proves nothing. Hitler was vegetarian. Sri M has subsequently been invited all over the world for Walks of Hope, albeit shorter ones.

The Birmingham Walk of Hope was organized by Bhai Mohinder Singhji, current chairman and spiritual head of Guru Nanak NishkamSewak Jatha (GNNSJ). The Walk took in a Hindu Centre, Mosque, Church, and Sikh Gurudwara, and Sri M was greeted by the heads of those institutions.

Bhai Mohinder Singh has received recognition for his “dedicated work to Roman Catholic-Sikh relations and for his enthusiastic commitment to working for peace among people of all faiths” and was created a Knight of the Pontifical Order of Pope Gregory the Great.

Sri M spent a day at Oxford, where he was received by Shaunaka Rishi Das, Director of the Oxford Centre for Hindu Studies (OCHS). He presented Shaunaka Das with a copy of his latest book, Wisdom of the Rishis. Also, a copy of his astonishing autobiography, Apprenticed to a Himalayan Master. Shaunaka showed him some of the sights of Oxford, including Balliol, the Bodleian Library and the Indian Institute, where once were trained the future administrators of the Empire. At the Ashmolean Museum, Sri M was taken round by the curator Dr Mallika Kumbera Landrus. He expressed a desire to return to Oxford for a few weeks of academic seclusion.

Sri M speaks without notes, in easily accessible parlance, and can give teachings for hours from the scriptures. There is nothing monkish or severe about his personality, instead he is convivial and has a keen sense of humour, quite British in its relish of absurdities.

His Master had sent him back to the plains with the injunction to marry, have children, and settle down, for “only then you’ll understand what’s going on. You’re not to become a sannyasi (renunciate). Most people who will come to you will be married. If you’re unmarried, what solutions will you give?” Sri M leads by example, demonstrating that it’s possible to successfully combine both an inner spiritual and outer material life in the world for those who wish to achieve spiritual fulfilment.

But will spirituality do away with the problems human beings face on a daily basis? Sorrows, troubles and tribulations are part of our lives, no one can expect to be hundred percent free of material problems. Tests are sent for us to discover what is truly important – this or that. If one passes the test, one takes a step forward on the evolutionary path. Spirituality has to be dove-tailed into our daily lives. Worship is of no use unless combined with sadhana (spiritual practices). Patience. Faith. Acceptance.

“Once you attain equanimity of mind, everything becomes spiritual,” he says. Happiness is our true nature, and it is to be found within. But even if we worship for say 35 years but remain the same – selfish, angry, greedy – then the sadhana comes to naught.

Sri M, 69, had Pathan ancestors whom the Maharajas of Travancore had imported from the NW frontier as bodyguards.

“That’s my physical lineage,” he explains. His spiritual lineage is quite different. There are Beings among us who cannot be categorized and labelled as definitely this or that. They teach us a way of life. Sri M follows his Master’s instructions: Keep things simple and direct. No mumbo jumbo. Be an example to your friends and associates. You can live in this world happily and in tune with consciousness. Babaji Maheshwarnath passed away in 1985.

Sri M was accompanied by his wife Sunanda, Director of the Peepul Grove School for holistic education, where the study of comparative religion is a major subject, along with foreign languages.

“Be down to earth,” Sri M says. “By keeping your feet on the ground, much can be sorted out.