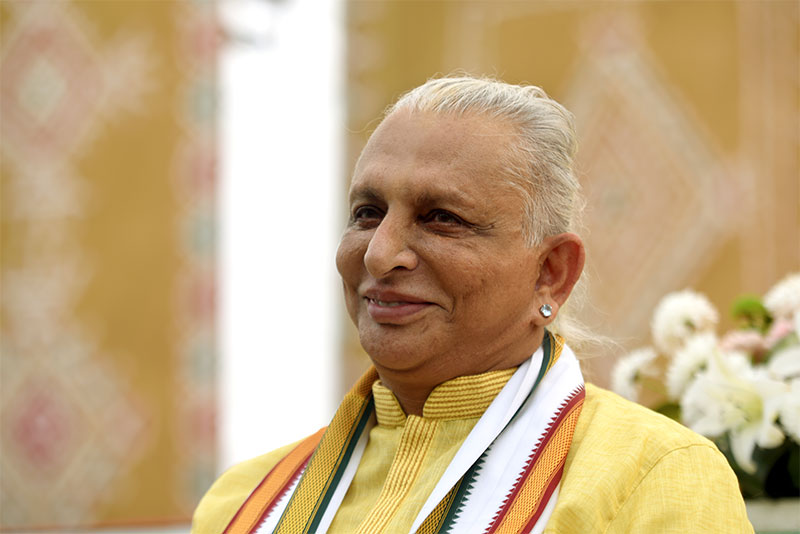 Positive mind is very important to activate the cells of the body to produce positive hormones in the system.  When the positive hormones begin to course through your blood stream then the resilience of your cells also goes up.  When the resilience of your cells goes up, then it is difficult for external factors to have much say regarding your health.  You can take care of it yourself.  So I think bringing about a positive state of mind is important in current times.

In the Bhagavad Gita, there is one beautiful statement from the Vedas that talks about completeness, which is Purnamadah Purnamidam. So what is to be noted is Purnamadah, we don’t know, but it also says, Purnamidam, that means in us also there is that Purnata there is that completeness, there is that expansiveness of consciousness. Even on faith if you accept that, it need not be faith, because many a times you see people doing things which are extraordinary which you cannot believe they did it in state of emergency. The neurological explanation for this is that the limbic system takes over which is in the mid brain, to protect you from danger therefore there is a sudden activity.

So it boils down to this that it happens all here at the crown which is why in Yog Shastra this part is called the Sahasrara Chakra, the thousand petal lotus. The Param Shiva Shambho is supposed to be sitting here which means all essence of our consciousness is here and it is from here that it spreads to other parts of the body.  So if you can put this in order by positivity, by chanting a mantra, I would say chant Om for a while with your attention (either at the eyebrow center or crown of the head) then that part of the brain will start supplying those hormones which are required to bring about positivity to the human system.  Once this happens then all the cells which are usually weak will become very resilient.  This is something which you can actually experiment and see.  It is not something which I am just saying as a theory.  Weakest of people sometimes do extraordinary things simply because they have decided to do it, how, because it is the brain that started working now.  It takes over your negative thought which says I can’t do it, not possible to do it, so in a way you transcend thought, because thought can be both negative and positive. When  you transcend thought, you come to the source of energy.  When you come to that source of energy then your whole system begins to improve.

I am only against people saying I have energy, I can give you that energy, just give me $10,000. This I don’t agree. Nobody can give anybody energy. Energy has to come from inside, so all this healing is nonsense and I don’t believe. The healing has to take place from within, because we all have the potential to heal ourselves.  Little bit of faith and a good doctor and so on is useful.

You can train yourself to produce the factors that will protect you from the attack of organisms that weaken your senses.  And that is through saying that there is energy in me, let me tap it, and one of the ways of tapping it is the chanting of Om.  Of course, one should not be also foolish to say that oh I am now chanting Om, full of energy, so I am going into the market place and hugging people. No! You have to be practical!

You know like the Arabs say, ‘Trust in God but tie your camel’, you have to be very practical in this matter. So chant Om sometimes, fix your attention. Keep a positive attitude.  The second world war has also passed.  Consider this as a third, it will also end.  And positive attitude increases when you help others.  Not the other way round.  If you give money to somebody from your bank account, your account is reduced.  But in this case, if you help somebody your bank account increases.  Not actually bank account,  I mean the inner energy increases.

So keep this in mind and try to keep a positive attitude.  If you are not interested in any spiritual matters, meditation, Om, etc. I would still suggest watch Laurel & Hardy for some time.  Seriously, I am not joking.  It takes you off from this world for some time.  You are in a different world altogether.  Then what happens mind is free of fear, at least for a short while and then what does it do, it beings to produce hormones that help your body and mind to become resilient and positive.