09.00 A M – MyTree Initiative – Planting of trees in Satsang Campus

The Gurupurnima Day began auspiciously with the MyTree initiative of planting trees in Satansg Nagar, Satsang Vidyalaya, and Satsang Rural School under the leadership of Sri M. The MyTree initiative seeks to fulfill Manav Ekta Mission’s aim of promoting sustainable living by encouraging planting of trees. As Sri M has so often said, the act of planting a tree and taking care of its growth establishes an inner connection with nature. Understanding this inner connection results in our personal growth. Of course, by planting trees, we also create a legacy to leave behind for the future generations—a better world than we found it. On Gurupurnima, many volunteered for sponsoring a tree to reiterate their individual commitment to build a sustainable India. 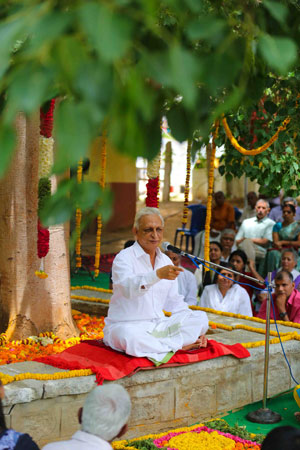 The Satsangis were eagerly waiting after the MyTree planting campaign to hear Sri M’s message on the Gurupurnima Day. Clad in a white shirt, Sri M soon arrived and took his seat under the Peepal Tree.

Sri M in his introduction to the symbolism of the day said that Gurupurnima is celebrated for paying respects and giving thanks to all the great teachers who have existed since the beginning of time.  It is not just for Sri M that the Gurupurnima is a larger concept.  It is meant for all the great Gurus – starting with Adinath, Shri Guru, Shiva, Krishna, and the great Christ who walked in the streets of Jerusalem. He said those who consider him as a Guru and yet continue to lead a life that is diametrically opposite to what he taught, the effects of what they do may not affect them but it may affect him since they have said he is their Guru and he has accepted it.

Sri M said everyone should look at himself or herself and see where they are.  To find this out, he said, everyone should look at the motive before every act. He emphasised that spiritual teaching includes looking after people who are less privileged and who are suffering; unless one does that, one cannot sit and meditate.  He quoted Kabir Das: “Bura jo dekhne main chala, bura na milya koi, jab dil khoja apna, mujhsa bura na koi.” He added that the spiritual path is to examine oneself first and do some honest job to earn one’s living.

He said he had a one-to-one relationship with everybody in the audience. He confessed the fact that he knows what everyone was thinking on an individual level since it all came from his understanding and experience of one mind. This ability manifested through various centres when the seeker experienced the understanding behind the concept of one mind. This also brought about an innate responsibility for others because one couldn’t be responsible any longer for his self alone. The feeling was more on a universal level. He quoted from the Sufi saint, Nizamuddin Auliya’s experience of wearing a blindfold whenever he went to the mosque for the Friday prayers.

Sri M also spoke about the concept of planting a tree and experiencing the great miracle of maintaining and watching it grow into a big tree.

The evening atmosphere was electric at Madanapalle as 1000-plus Satsangis waited with bated breath for Sri M to arrive for the Gurupurnima function. For many Satsangis and Padayatris, it was also an occasion to meet and exchange notes on their post-Walk of Hope life. Clad in a cream kurta and pyjama, Sri M arrived and took his seat under the Peepal tree. Bhajans by children of Satsang Rural School and Satsang Vidyalaya commenced the evening of Satsang and devotional music. Little Advita Kakkar’s brief Kathak recital was a graceful and endearing interlude.

During his Satsang, Sri M sought to bestow the Gurumantra to those he was yet to initiate into Kriya Yoga. He mentioned how he had, over the years, emphasised on the rules to be followed for anyone to be initiated to Kriya Yoga. He stated that Kriya Yoga was not the only way to salvation though, as part of his Nath tradition, he advocated it to many. He spoke about Mira Bai and Ramana Maharshi who had scaled great spiritual heights without the aid of any Kriya. He emphasised upon the absolute tenet of not causing injury to living beings in order to be eligible to do Kriya Yoga.

He also spoke about the confusion of whether to worship a formless God or God with form. He added that it is better to start with worship of a God with form since most of us are attached to names and forms in our daily lives. It was similar to how one should try swimming in ponds before attempting to swim in the sea. He also said there was no hard and fast rule whether one initiated into Kriya Yoga should not visit temples or other places of worship. He spoke of 108 Kriyas of which Sri Guru Babaji had taught only three to Lahiri Mahasaya. The effort was to gather pranic energy and bring it to a point—releasing tremendous energy. This energy is said to be generally dissipated in normal human beings. The practice of Kriya makes people more kind and tranquil, and turns them into ‘stithaprajnas’—possesing great equipoise.

Sri M recounted the Bhagavata story about Kunti’s prayer—leading the Satsangis to be absorbed for the umpteenth time with the grandeur of Kunti’s personality. He concluded the Satsang with a brief, guided meditation. The Dhuni was lit at 6.00 pm and the audience was regaled by Hindustani classical music by Shri Vijay Kumar Patil. He was accompanied by Shri Gurucharan Garud on the Tabla and Shri Surya Upadhyay on the Harmonium. Thus, another memorable Gurupoornima celebration, the biggest to date, came to an end with pranams to the Sri M.

Videos of the Satsangs