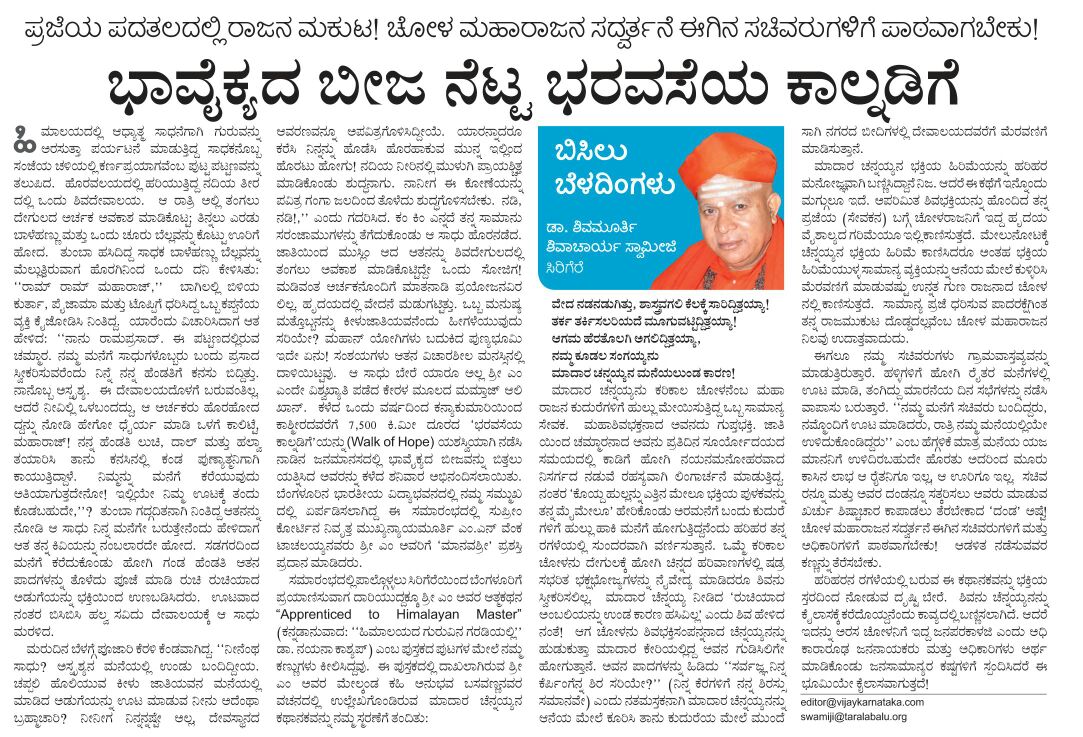 Walk Of Hope That Sowed the Seeds of Emotional Integration

In the freezing cold, a spiritual seeker on his way to the Himalayas, reached Karnaprayag, a small town. A priest of a Shiva temple, on the banks of a river bordering the town, offered the seeker a shelter for the night. The priest offered the seeker a meal of two bananas and a piece of jaggery before setting off to his home.

While the famished seeker was enjoying the meagre meal, he heard a voice saying, “Ram Ram Maharaj”. At the door stood a dark-complexioned visitor wearing a white pyjama, kurta, and a cap. When asked who he was, the stranger replied “I am Ramprasad, the cobbler of the town. My wife dreamt last night that a sadhu would visit our house and partake of food with us. I am an untouchable. I am forbidden from entering the temple. But I saw your entry and the exit of the priest, and made bold to somehow come here. Maharaj, my wife has prepared luchi, dal, and halwa, and is eagerly awaiting the arrival of the saint of her dream. Perhaps it is too much to ask you to come home! Can I bring your meal here?”

When the sadhu told the emotionally charged cobbler that he would come to his house itself, the cobbler could not believe his ears. With great enthusiasm, he took him home, performed Paadapuja, and fed him tasty food, with devotion. After enjoying the hot halwa post dinner, the sadhu returned to the temple.

The next morning, the priest was in a fit of rage. “What kind of a sadhu are you? You have eaten at the house of an untouchable. What kind of a brahmachari are you who eats in the house of a low-caste cobbler? Not only have you polluted yourself, but you have polluted the entire temple premises. Before I call someone to thrash you and throw you out, get out of here. Go take a dip in the holy river, repent for your action and get purified. Now I have to purifiy this room by washing it with the water of the sacred Ganga. Get out”, he shouted.

Without a word, the sadhu gathered his meagre belongings and left. Having offered shelter to him—a Muslim by birth—in a Shiva temple, was itself a wonder! There was no point in talking to the orthodox priest. The sorrow in his heart was heavy. Is it right for a human being to castigate another as belonging to a lower caste? Is this the sacred land where great saints lived?! Doubts assailed his progressive mind.

That sadhu was none other than the renowned Sri M, born as Mumtaz Ali Khan in Kerala. Having successfully completed a year-long , 7,500 km “Walk of Hope” from Kanyakumari to Kashmir, in an earnest attempt to sow the seed of emotional integration among his countrymen, Sri M was felicitated on Saturday. At a vibrant function got up by the Bharatiya Vidya Bhavan, Bengaluru, Justice M. N. Venkatachalaiah , former Chief Justice of India, conferred the “Manavashri” award on Sri M, in my presence.

All through my journey from Sirigere to Bengaluru, on my way to the function, Sri M’s autobiography, “Apprenticed to a Himalayan Master” (translated to Kannada as “Himalayada Guruvina Garadiyalli” by Dr. Nayana Kashyap), kept me riveted to its pages. The above-mentioned bitter experience of Sri M, as documented in his autobiography, brought to my mind a saying of Maadhaara Chennaiah as recalled by Anubhava Basavanna in his vachanas.

Maadhaara Chennaiah was an ordinary servant of king Karikaala Chola, taking care of his horses. He was a great yet silent devotee of Lord Shiva. A cobbler by caste, Chennaiah would go to the forest at dawn and quietly worship the Shivalinga amidst the beauty of nature. Afterwards, he would load his cart with the cut grass, his mind and body filled with love for God, and go to the palace and feed the horses the grass before returning home—this is what Harihara describes beautifully in his work, “Ragale”.

Once, when king Karikaala Chola went to the temple and offered a variety of delicacies to the Lord, it was not accepted. It is believed that the Lord said that his stomach was full, having drunk the porridge given by Chennaiah. Then Karikaala Chola goes in search of Chennaiah who lives in a hut at a locality populated by the lower castes. Karaikaala Chola falls at the feet of Chennaiah and says, “Even my head is not equal to your feet”. So saying, he places Chennaiah atop an elephant, while he himself rides ahead on a horse, taking Chennaiah in a procession on the main streets of the town to the temple.

Even today our ministers go and stay in rural households. They eat in the houses of villagers, stay there overnight, hold meeting the next day, and return. “The minister had come to our house. He ate with us. He stayed at our home overnight”, these are the only proud words that are left with the owner of the house. It has no other use for either the farmer or the village. The expenses borne to host the minister and his team is a penalty paid by the villager just to observe the protocol of hospitality. Cholaraja’s model conduct should be a lesson for today’s ministers and bureaucrats. It should be an eye-opener for present day administrators.

It is one thing to view this story of Chennaiah as one of great devotion as seen in Harihara’s “Ragale” . That Lord Shiva took him to Kailasa is well-described in the work. But, if bureaucrats and people in power interpret this as Cholaraja’s supreme concern for his subjects and respond to people’s problems, earth will become heaven itself.