The Aviral Godavari project is aimed at the rejuvenation of the Godavari River so that it flows uninterrupted (Aviral), throughout the year as it once used to. The Godavari originates from the hills around Trimbakeshwar, near Nashik in Maharashtra. Over the years, large scale deforestation and misuse has led to significant soil erosion and consequent depletion of groundwater and drying up of subterranean aquifers. This has resulted in massive runoff during the monsoon season and acute water shortage in the pre-monsoon summer.

The initial and immediate goals of the project are therefore:

a. Afforestation and Greening of the Brahmagiri range around Trimbakeshwar, to restore the soil of the region.
b. Recharging the aquifers through the creation of Loose Boulder Dams (LBD ro Bandaras) throughout the range.
c. Rejuvenation of the various historical water bodies (Kunds) in the area.

To move forward with an action plan to attain these objectives, a task force has been set up with participation from several like-minded organizations both local and national in scope. The members of the task force met at Nashik and Trimakeshwar on the 6th and 7th of November 2022 to understand the conditions on the ground, share success stories and work towards an action plan for making ‘Aviral Godavari’ a reality.

The participants in the Task Force included members from

The agenda for the two days was as below:

Nov 6th is a special day for all Satsangies, being the birthday of Sri M, the founder of ‘The Satsang Foundation’. It was therefore a fitting celebration as a day of Seva and the commencement of this immense project.

The event was launched with an invocation followed by speeches by the assembled dignitaries including:

Water from 75 rivers within Maharashtra had been brought to the inauguration site and ‘Kalash’s’ with the water given to assembled volunteers from various local organizations. A pledge was made to protect and preserve the sacred waters from all these rivers.

The event was attended by various volunteers, students and also local villagers and inhabitants of the hills. The scope and vision of the project was elucidated and the benefits to the local communities also highlighted. Active participation and support was also sought from those assembled.

After the event, the team got to work. Boulders were rolled, collected and arranged to create the first Bandara (Loose Boulder Dam) in the hills. With all hands on deck the task was efficiently accomplished, much to the satisfaction of all participants. The first impact of the initiative had already been made!

The inaugural event concluded with the slogan ‘Brahmagiri ki Hariyali, Godavari ki Pavitrata’ rending in the air. The atmosphere was charged and everyone raring to make our vision a reality.

The core task force then assembled after lunch in Nashik to discuss specific strategies and work out the broad contours of an action plan. Over the next 3-4 hours various ideas, experiences and strategies were discussed and debated. We also heard of practical experiences from specific local organizations who had taken charge of parts of the Godavari or its tributaries. The topics of discussion included, 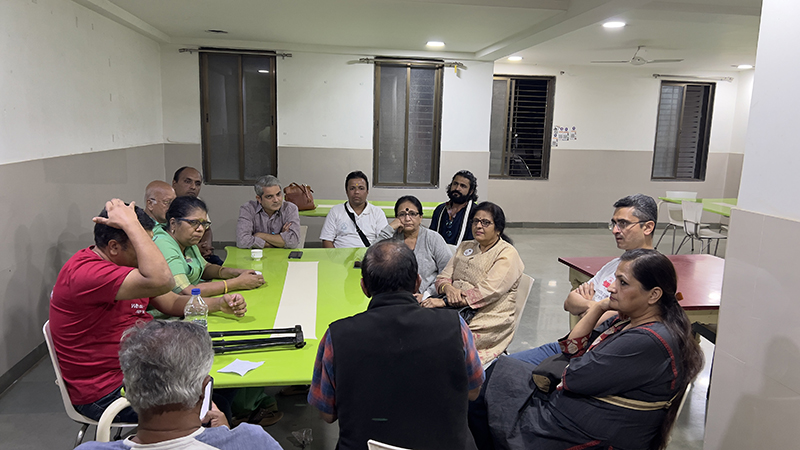 In the evening, under the benign light of the near full moon, we paid our respects to our mother Godavari with an aarti and the lighting of lamps and prayed for success. 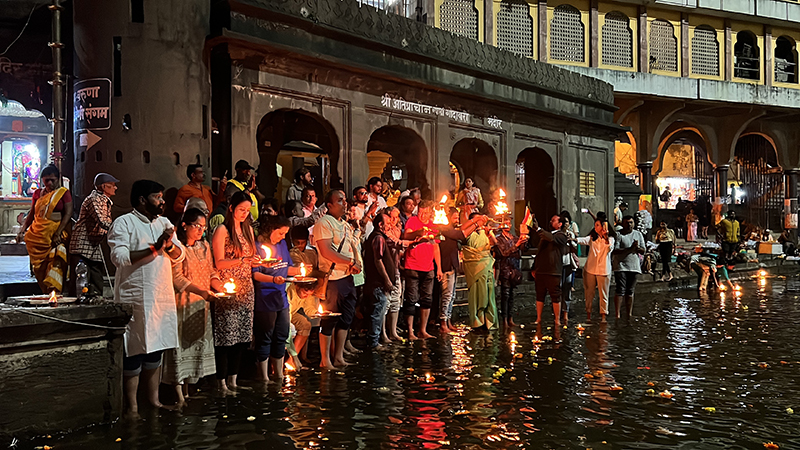 On the 7th morning, most of the team again assembled at the Dnyanjyot Academy School at Trimbakeshwar. The goal was to seed the minds of the students with the value and joy that nature provides and the importance of nurturing trees. The MyTree concept, mooted by Sri M and championed by The Satsang Foundation, aims to rekindle the individual’s connection with nature through the nurture of trees.

The event at the school was in coordination with Kusmade – Manoj Sapte. The students had an interactive session with the Mytree lead, who ran through videos that were self-explanatory with the message that we humans need to, grow, nurture and save plants who in turn take care of our essential needs/requirements. The teachers, the headmaster and the correspondent also participated and assured us that they will be with us and spread the message. Brand Ambassador of ‘Chala Nadila Januya’ Marathi Actor, social activist Mr. Chinmay Udgirkar encouraged and motivated the children and the school by his speech.

As part of this program, Kusmade is giving 500 kits- seeds/ seedlings to the school and the children to take home and grow. The team will be visiting the school periodically to support and assist them.It was enthralling to see the enthusiasm in the students whose smiles reflected their minds. Mytree and Kusmade have further plans to reach out to as many schools as they can and spread the message. “Make trees your friend – they need your support”.

With this program, we now have 500 young minds impressed with the importance of preserving and nurturing trees. This will pay rich dividends over the years in making Aviral Godavari a reality. Many such awareness campaigns are being considered in the project action plan being worked upon.

The initial meet of the project team concluded with the event at the school. As a follow up, an action plan is being drawn up and teams being formalized with specific responsibilities to work in a time-bound and a goal-oriented fashion.