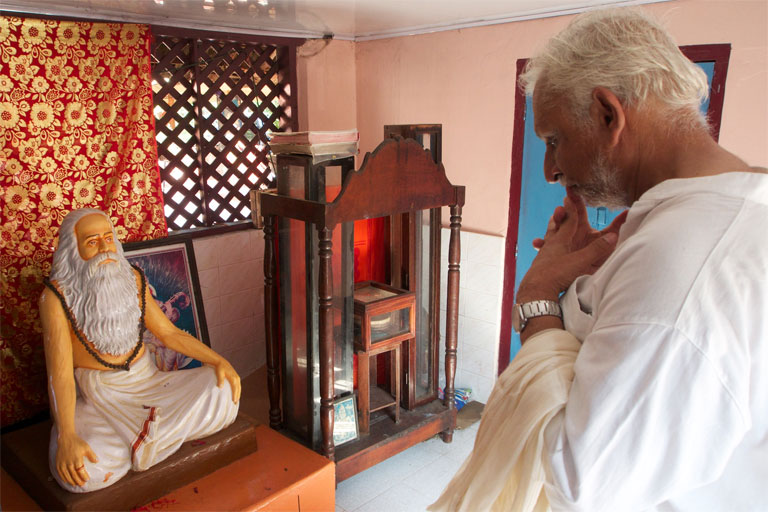 Sri M at the Panmana Ashram, Kollam District, Kerala during the Walk Of Hope 2015 – 16

Sri M writes about Chattambi Swami, an eminent yogi, a great scholar and social reformer from Kerala on his birth anniversary, 25 August 2016, in the Malayala Manorama daily.

The article as it appeared in Malayala Manorama

Please click on the image for optimal reading experience


Chattambi Swami was a great yogi and social reformer. He had a unique personality. His parents named him Ayyappan, but those close to him fondly called him ‘Kunjan’. Both the names suited his character to perfection. He studied the Vedas and yogic texts with a child like curiosity and openness of mind, two qualities he was innately blessed with. He was also called ‘Chattambi’, which means a leader or reformer, which again matched his wonderful personality. He received the name ‘Chattambi’ as an accolade for his leadership qualities, while studying in the school run by the famous scholar Raman Pillai.

Chattambi swami was born in 1853 when the caste system in Kerala was at its zenith. The social environment in Kerala was so deplorable that Swami Vivekananda condemned the state as a mental asylum. Chattambi Swami’s father belonged to the Namboothiri community while his mother was a Nair. As the Nairs followed the matrilineal tradition, Swami was recognized in social circles as a Nair. He gained deep knowledge in Sanskrit and authored many Sanskrit books. It should be remembered that he accomplished all this at a time when studying Sanskrit was taboo for those who were not Brahmins by birth.

He made revolutionary attempts to explain Vedic theories to ordinary people in a simple language and thereby to free them from the darkness of ignorance.

Reading his books is like delving deep in to the ocean of Shrutis, which present the eternal truths of the Upanishads in a simple, comprehensible language. It was through his efforts that common people of all denominations got the opportunity to get acquainted with the Advaita philosophy of Adishankara.

It is my belief that if you take in to account his philosophy and the yogic practices he followed, he was not only a great yogi, but also a Yuga purusha-God incarnating on earth as a human being for the spiritual edification of the human race.

He spent his last years in Panmana, a remote village in Kollam. Like other Siddhas before him, he had a clear premonition about the impending end of his physical existence.. He left this world on May 5, 1924.

The place of his Samadhi is one of those beautiful, peaceful and special places that I like to visit. One can say without any doubt that he was an enlightened soul, an eminent yogi, a great scholar and a social reformer with a difference.