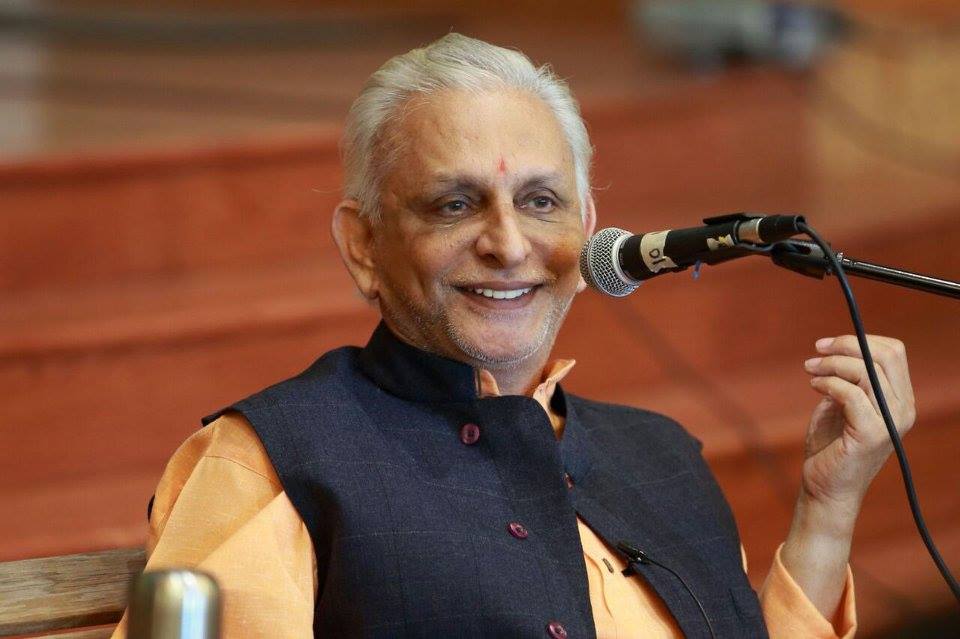 When you hear a spiritual man is in town, you imagine a person with a beard or flowing robes. When you are ready to meet him, you prepare for a retinue around him speaking in hushed tones. But beginning with his name, Sri M hammers away at clichés. He looks like the other guy in the audience and is accompanied by a party of one, in keeping with his low-key style, focused on message rather than persona. His message? Harmony: Of the being and among all beings.

His passport carries the name he was given at birth by his affluent Pathan parents: Mumtaz Ali. At age 9, standing under a jackfruit tree in the garden of his Kerala home he “met” a youthful stranger with matted hair. After a brief conversation, the person who was to become his guru, Maheshwarnath Babaji, disappeared. At 19, he left home in search of the master. Trials later, he found Babaji, journeyed with him for over three years and was given the name Madhukarnath. He was then instructed by his guru to return home and live the life of a regular householder, so he married and has two children – a son & a daughter. M met many illustrious masters and conducted intensive learning and contemplation. He is able to recite the Quran, chant from the Upanishads and quote liberally, with understanding, from the scriptures of almost all faiths. He saw the commonality in all. While he has neither “converted” nor changed his name, he prefers to go by ‘M’—a moniker which he gleefully tells all stands not only for Mumtaz Ali and Madhurkarnath but also for ‘Manav’, or human. The ‘Sri’ is a honorific given to him by others.

Sri M made headlines in 2015 when he undertook a padayatra with a core group of 50 people from Kanyakumari to Kashmir, walking about 7,500 kms through 11 states in India. Throughout, the 67 year-old M pushed the ideal of an India free of discrimination and religious discord.

Sri M, 68, lives in Madanapalle in Andhra where he manages several projects to benefit the poor. He was in Southern California recently and spoke to the public.

Excerpts from his chat with India Journal:

Q : What brings you to the U.S. every year?
A: So many people have left their home in India and come here. I feel that externally the culture has survived somehow but deep down the philosophy has not permeated and I find they are hungry for it. The other reason is that I have found Westerners interested, deeply interested. They are jignasus, seekers. I just spoke at Google and Yahoo. They are mostly young, non-Indians. Once they listen, they want to absorb and even come to meet me in India. But there is also a naiveté and the great danger that they will be misled. So I feel it is a great responsibility to give them the right version.

Q: What was the greatest challenge you faced during the padayatra. How did the religious orthodox react?
A: We did not go city to city but through small towns and villages. Our aim was to plant seeds of harmony. But more than that, the lessons we learned is that the Indian people do not want discrimination of religion. That comes from vested interests, it was quite clear. There was a village we went to where there was only one Muslim family. We went to sensitive areas like Godhra. We went to homes both Hindu and Muslim. They want to forget what happened and move on with their lives, but are not being allowed to because of votes and politics. The Indian psyche is such that it wants people to be together. We should leave them alone. I don’t belong to any party. I have met the Prime Minister three times and discussed it with him threadbare. But it is not about one man, who is no doubt doing a lot, but everyone has to fall in line. In my own small way I am attempting to get the message of harmony out.

Q: Why does the extremist become the voice of a whole community?
A: There are different kinds of extremists. I don’t want to mention any religion. But there are some religions whose extremism is not comparable to any other extremism. The RSS practice exercises with lathis and some so called rationalists say they are extremists. Let’s talk about those who carry AK47s. But that does not happen because of vote bank. These are the ones who will not change. I have talked to them but they think it is part of their religion. I have been attacked and had to have 30 stitches. They want me to talk only about the Quran. But it is not going to stop me from speaking out. When truth is on your side, there is nothing to fear.

Q: What is the one central idea that appeals to you from each faith?
A: Jain – Ahimsa Paramo Dharma. Others talk about it like Patanjali in the Yoga Sutras. In the yama-niyamas, ahimsa is first but the Jains have taken it as a creed. But more than that is the philosophy of Anekantavad. Which means what? You won’t be told to convert as it is clearly understood there [are] many views of the same thing. Islam – It has a certain discipline which may not be found in others. If it’s prayer time and even if they are traveling by train, they will spread their mats and do it. On the flip side, discipline can end up in rigidity but remember no discipline can end up in nothing at all. Hindu – It is a system of thought. You can’t call it a religion. Sikh – its openness. Guru Nanak was perhaps one of the earliest to bring the common tenets from Islam and Hinduism, especially from the Bhakti system, together. See this line from the Guru Granth Sahib: Awal Allah Noor Upaya Kudrat Ke Sab Bande: we are all children of the same god. Then there is the concept of langar – everywhere we went in the padayatra, Sikhs were there and never failed to feed us. Christian – the beautiful teachings of Jesus. He was a wandering yogi. He had love and forgiveness as his touchstone. Look what he told us: bless them that curse you, do good to them that hate you, pray for them which despitefully use you. Then he also said: For where your treasure is, there your heart will be also. So,(pointing to his chest) that’s where the real treasure is.

Q: You speak of meeting “other beings.” In a rational world, has that got you into trouble?
A: Sometimes!

Q: So when you say you met someone under the jackfruit tree, what happens?
A: I have nothing to hide. Take it or leave it. I am also a very rational person. In my childhood I was one of the most skeptical people you would have met and in retrospect the kind of questions I asked, I feel pain now on how stupid they were. There are two kinds of people, one where the person is trained to think rationally and the other is the fellow who has been fooled by so called spiritual people and is so disillusioned he says all this is bunkum. So you cannot blame anyone. I keep saying what I have to say. I don’t mind even going to a bar and saying, let’s talk…as long as the message is heard.

Q: What do you call yourself? Yogi? Mystic? Madman?
A: [chuckles] I really can’t give you a definition on this. On the one hand I am a yogi, because I practice yoga and I have gone a little ahead…I think! On the other hand, I am a householder, an image not associated with a yogi. I guess you can say I am someone who has struck something that is beyond the senses and wants to bring it down to people with my words. I feel I have touched something wonderful and why shouldn’t I share it with others?

Q: Not with the vividness and preciseness you narrate yours. There is color, emotion, sound…
A: Because my mind has become quite and sensitive and the memory is so clear, the dream can be stretched from the waking state to the dream state. It can be rubbed off. In yogic science there is a process for that. But when they are beautiful dreams, why should you remove them?

Q: Tell us about your paintings.
A: I have been painting from childhood. I am not a trained artist. I do oil on canvas. No watercolors for me. Depending on the mood, I do everything from portrait to abstract…it’s just a flow of colors. I have never been able to hold a show, as once I finish a painting someone or the other takes it away! ​