The tangible benefits of trees are obvious: producing  vital oxygen, providing food, improving air quality, stabilizing the climate, and giving shelter to birds and animals. However, there are many spiritual and intangible benefits to trees as well. The greenery and freshness of trees acts like a stress reliever for human beings. Countries such as Finland and Canada that have a large forest cover are often rated as some of the happiest in the world. Having trees around promotes health, happiness and well-being.

The Mytree initiative of The Satsang Foundation, since its inception in 2015 during the Walk of Hope, has aimed to inspire harmony with nature, strengthen the ecosystem, and reduce our personal footprint. Mytree volunteers have so far planted and sustained over 32000 trees in places as varied as Delhi-NCR, Bangalore, Mumbai, Pune, Chennai, Hyderabad, Varanasi, Mizoram, and Madanapalle.

‘Each One Plant Two’, the latest project under the Mytree initiative was launched to strengthen this connection and turn it into a nationwide movement. Two branches of this movement are engagement with children in schools and addition to urban tree cover across India’s cities, including the creation and expansion of urban mini-forests.

Introducing Maitri with Trees in Schools

The nation’s future belongs to its children. Encouraging them to think about sustainable development and environment conservation is best done early, by recruiting them into actively participating in initiatives that help to secure the future.  Keeping this in mind Mytree volunteers of The Satsang Foundation, are engaging actively with school students. 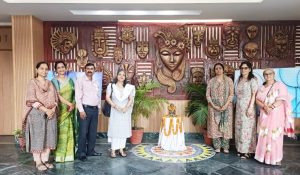 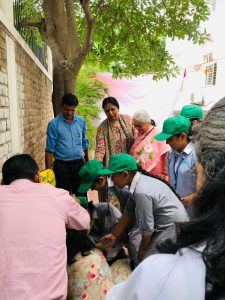 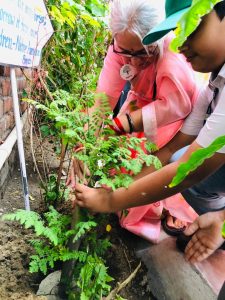 The Delhi team collaborated with several branches of Bal Bharti Public Schools to launch the ‘Adopt a Tree’ campaign. This project entails the students planting more than 5,000 trees. Bal Bharti Public Schools Noida, Pitampura, Rohini, Brij Vihar, GRH Marg, and Manesar have participated in this drive. The student body was very enthusiastic, and they have already planted 750 trees so far. The students have taken a pledge to plant more trees, nurture them, and establish a bond of ‘Maitri’ with them. 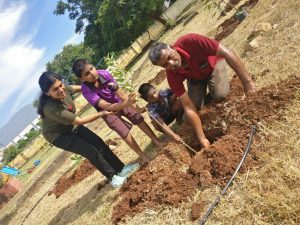 The team undertook a plantation drive at the Government School for the Blind at Poochiyur village on Thondamuthur Road. Twenty-five saplings of shade-providing and flowering trees were planted by the blind children.

The team teamed up with Thanthra Vidyapeedam, one of India’s first modern schools of tantra, situated in a densely-populated area of Ernakulam with a high rate of air pollution, to plant 22 saplings to improve the air quality Index in the vicinity. Students expressed a sense of belonging to the trees and the need to consider it their divine duty to sustain the harmony of life on Earth. 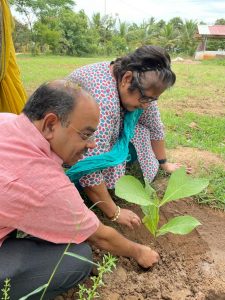 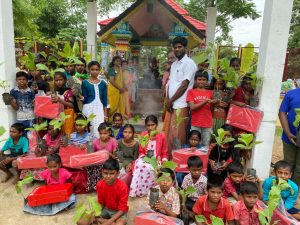 The team went on a tree plantation drive at Thirupanangadu village, near Kanchipuram. Help was provided by the farmers of the village and the students of the local government schools. The children promised to take care of the saplings and send photos periodically as proof of growth of the plants. The Satsangis also sponsored satchels for these school children. Among the farmers, each farmer was given five saplings and a total of 500 saplings were distributed. 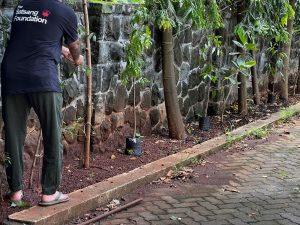 The team undertook a large-scale plantation drive, and planted a total of 760 saplings in Nandurbar, Maharashtra at school and college campuses with the help of students. The trees planted were Sisam, Karanj, Neem, Mahu, Tamarind, Umber, Custard Apple, Ashok, Vad, Peepul, and Amala.

Bringing Forests Back Into Cities

Another theme close to the heart of the Mytree initiative is the forestation of urban landscapes. Creating urban forests facilitates an increase in water-table levels, improves the cities’ air quality, and allows various birds, animals and insects to thrive, and helps restore the natural balance even within urban spaces.

The team undertook tree-plantation drives at the TSF Campus in Madanapalle, at the Dehu Temple (Bhandara Hill, Pune), at the Machhindranath Temple (Bhagada Hill, Ahmednagar Dist.) and at Shivpuri Ashram, Akkalkot.

We have become accustomed to seeing industrial spaces as environmental wastelands. The Mumbai team worked on greening of the industrial belt in Malad with the plantation of 18 saplings on the premises of the New Sonal-Link Industrial Estate. The staff members of this industrial estate pledged to water and take care of the saplings.

Rabindranath Tagore said, “The one who plants trees, knowing that he will never sit in their shade, has started to understand the meaning of Life.”

Trees and forests sustain all forms of life and they make the earth habitable for us.

This Diwali Let’s go green by gifting plants that have both environmental as well as nutritional values.

The Satsang Foundation’s effort at involving the next generation and reclaiming urbanized spaces for forests can gain momentum with the participation of more volunteers. We invite people to be a part of this drive and connect with us at mytree@satsang-foundation.org.

Let us rejuvenate our beloved Earth. Join us in making a difference!

MyTree Project
Back to Newsletter