26th Aug ’21 was a day of all-round  auspiciousness at The Sacred Grove in Chowdepalle. It was the day when the joyful presence of  the divine was invited here.

It all started months ago, with Desi cows being brought in from Melkote to the  Goshala, being run with love and care by the inmates of the upcoming Centre and the local caretakers. In the Indic tradition love and care for the Gau-vansh is symbolized by ‘Gopal’ himself;  Go-pal – the one who looks after, nurtures and nourishes the cows.

So it was decided to invite Gopal’s playful presence here, not just to look after the cows but also for the commune of seekers expected to flock here over the years.

To symbolize His presence, an open shrine was built in the goshala complex and a statue of Adipurusha – Sri Krishna, standing in Tribhanga pose, arrived from Mysore.

The Prana pratishtha ceremony of the idol was scheduled and the residents of Madanapalle Ashram joined all those involved in the activities at Chowdepalle. The Program started with Sri M visiting the goshala and feeding the cows.

This was followed by  chanting Vishnu Sahasranama in front of the new shrine, while the reigning deity of the region, Lakshmi-Narsimha, watched over the ceremony from its temple-abode on the hill top.

Sri M performed the rituals amidst the sacred chants – the Yajna-Karma of transforming the meditatively carved idol into a Jagrit deity. 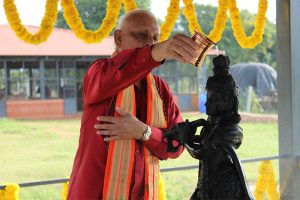 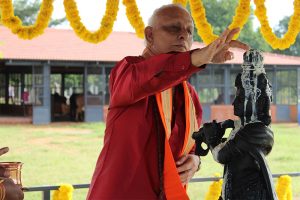 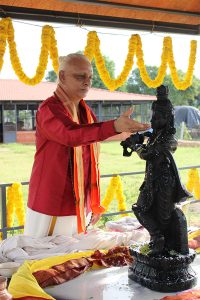 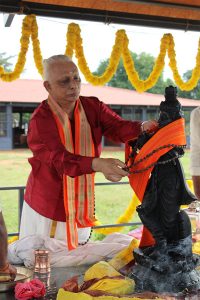 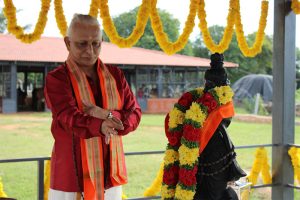 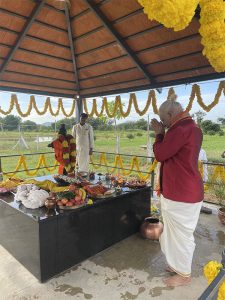 Then in a rare moment of silence, Sri M did the Prana pratishtha by closing his eyes and touching the Anahata Chakra of the idol.

The customary offerings of Garlands and Aarti were followed by three Pradakshinas of ‘Madanagopala’.

The last offering of the day was made by Sujatha, by performing a soul stirring  Mohiniyattam dance as her offering to the Guru and Krishna. The auspicious day came to a close with Sri M distributing Prasadam.

The Sacred Grove
Back to Newsletter