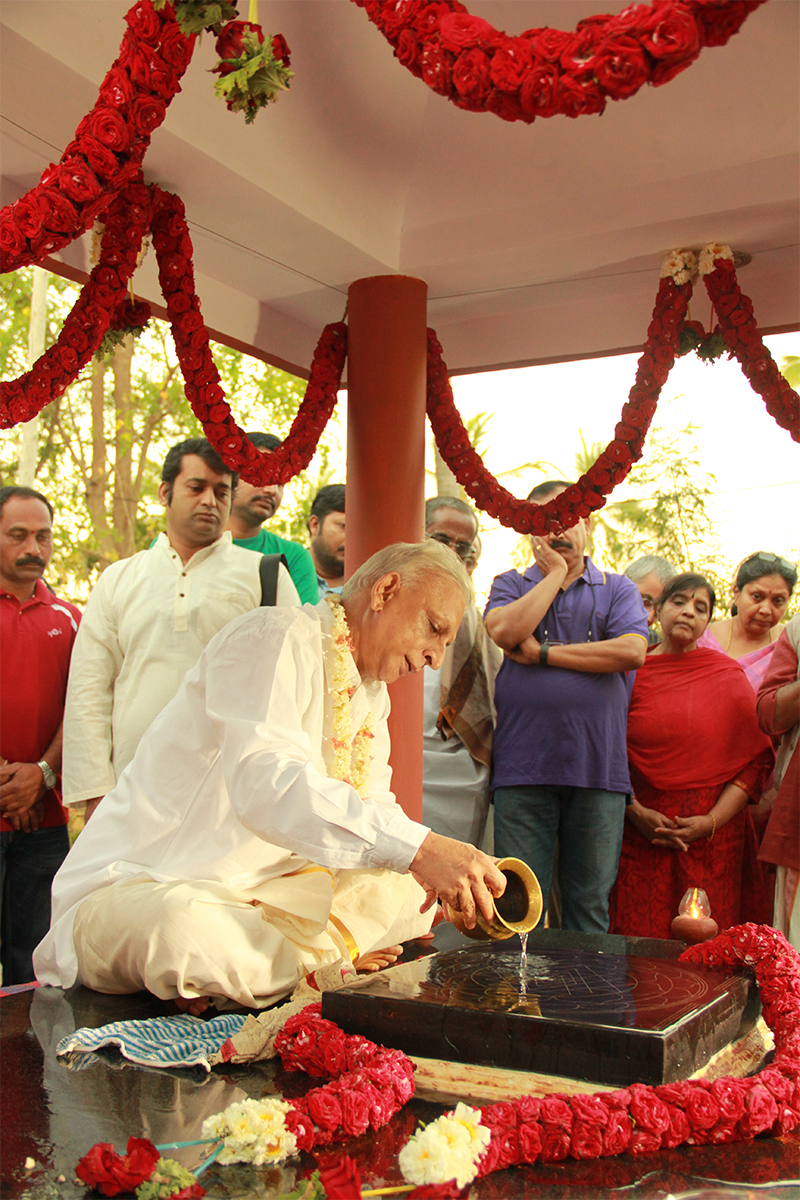 I think, in the present millennium, in the present time that we are passing through, the teachings of text books like the Soundarya Lahari, purported to be written by Adi Shankaracharya, are very important because we need to balance the heart and the head to move forward.

Soundarya Lahari is Shankara’s description of Devi/Shakti and celebrates the ecstasy of the movement of the Kundalini – here called Bhavani – all the way up the Sushumna, until she merges with her Lord Shiva in the Sahasrara chakra.

Soundarya Lahari is also important because it was written by somebody, who having gone through the essence of Vedanta, still decided Tantra is important. It’s not anything mysterious, it’s meant for you and me. We, who live in this world can see the beauty of the Devi in everything that is beautiful. Although Soundarya Lahari contains a lot of bhakti or devotion, it is actually mystical poetry.

Whenever you say Shakti/energy, in the Indian tradition, it is represented and symbolized as feminine. In the macrocosm nothing can function without energy. This shakti, fortunately for us, resides in every human being, man or woman, in the form of the Devi known as the Kula-Kundalini Devi.

Kundalini, which is considered by the Tantras as the manifestation of the infinite supreme energy called Parashakti or Bhavani, is said to reside in a potent form -not kinetic, inactive but not a fully active form, at the base of the spinal cord of all human beings – coiled like a spring or as a snake turned three and a half times around itself, as described in the tantric symbology, waiting to be awakened by the spiritual practitioner.

If you read the Soundarya Lahari, and also the Lalita Sahashranama, there are many mentions of centres or chakras. This energy resides in all of us at the bottom of the spine area, which is known as the Mula-adhara chakra. Mula-adhara means the root foundation- it’s the root and it is also the foundation.

When you worship the Devi in Tantra, the Devi is decorated in a very beautiful way. So Soundarya Lahari – the teachings of Tantra are more to do with aishwarya, bhakti, beauty and so on rather than discarding everything and sitting in a cave. Even though Shankara himself was a sanyasin, he came from a traditional family of Sri Vidya upasakas. So he could not have helped writing the Soundarya Lahari because all people in whom the energy is awakened have enjoyed the ecstasy of Sri Vidya, of Soundarya. And once it is touched and enjoyed, nothing in this world actually looks so beautiful as that. When you see something beautiful, immediately it is the Devi that is awakened.

Sri Vidya means the knowledge or the vidya of understanding srimati which is the supreme reality in the form of the Devi. For this, certain mantras have been formulated by the ancient teachers who had intuitive visions of how it should be done. And this mantra is known as the Sri Vidya.

Sri Vidya is not any word which has a meaning which can be translated in a dictionary. They are sounds, like the beejaksharas. Beejakshara means seed sound, which has the potency to awaken the energies. For instance. Hreem, kleem etc. In the same way Sri vidya mantras are beejaksharas put in a certain order and linked in a certain order depending upon which type of Vidya you are practicing which has to be chosen by the teacher and disciple through personal consultation. There are different kinds of Sri Vidya—for instance, there is what is known as the ‘Panchadasakshari’, which is the fifteen-letter Sri Vidya mantra, then there is the Shodasakshari, the sixteen-lettered Sri Vidya mantra.

Before you enter into the actual Sri vidya mantras, you have a practice known as the Baltripura Sundari. Tripura sundari means the beautiful lady in all the three puras. Puras meaning three worlds. Bhu loka, bhua loka, swarg loka. Bhoorbhuwaswah. Tripura Sundari also means Sundari that shines in the mula-adhara, in the manipura and the third when she is fully observed in her lord which is Shivam, in the sahasrara. These are the three puras. So it is also called Tripura rahasya.

The followers of the Sri Vidya also worship the ‘Sri Yantra’ – the ‘Sri Chakra’ which is a diagram drawn to symbolize the infinite primordial energy as it permeates and pervades the entire universe. First, they worship the Sri Chakra or the Sri Yantra externally and then they transfer it, by drawing the image within their minds, to the Anahata chakra or the heart center and offer mental worship to the Sri Chakra with the bijaksharas that are to be chanted until the Anahata chakra activates and from there the Kundalini is led gradually to the Sahasrara chakra—the culmination of their spiritual practice.

The description of Devi outside and the connection of the Devi inside is beautifully expressed in the Soundarya Lahari by Shankara saying – this Devi which I am praising resides in us in the Muladhara as Prithvi tattva, in the Swadhisthana as Aapas, in Manipura as Agni, as Vayu in the Hridaya, as pure Akasha in the Vishuddha, as pure light in the Ajna and then after having ascended all that, you sport in ecstasy in the Sahasrara with your Lord.

The first thing required for anybody who takes up the practice of Sri Vidya- worship of Devi, is humility. No ego and extreme devotion so that you desire nothing but the Devi.

When you practice the Sri vidya properly, by chanting and proper worship, guided by an experienced teacher, then the energy begins to move up the Sushumna channel, touching six centers as it ascends, until it reaches the topmost center, which is known as the thousand-petalled lotus—the Sahasrara Chakra—located in the crown of the head. When the Kundalini energy reaches there, then it merges with the Supreme Reality called Shivam. Here there is no difference between the Shiva and the Shakti. It becomes one and the ecstasy of the union of Shiva and Shakti in the Sahasrara is celebrated as the ecstasy of beauty, which is the Soundarya Lahari. This ecstasy far exceeds the ecstasy any ordinary human being has ever experienced before.

This is just an introduction to the Soundarya Lahari. I suggest that there are many good commentaries and translations of the Soundarya Lahari by great Pandits. There is a beautiful one in Tamil by Kavyakantha Ganapathi Sastry. The translation and commentary by Swami Tapasyananda published by the Ramakrishna Mission is a very simple and I think when you start it, it’s a good idea to go through it.