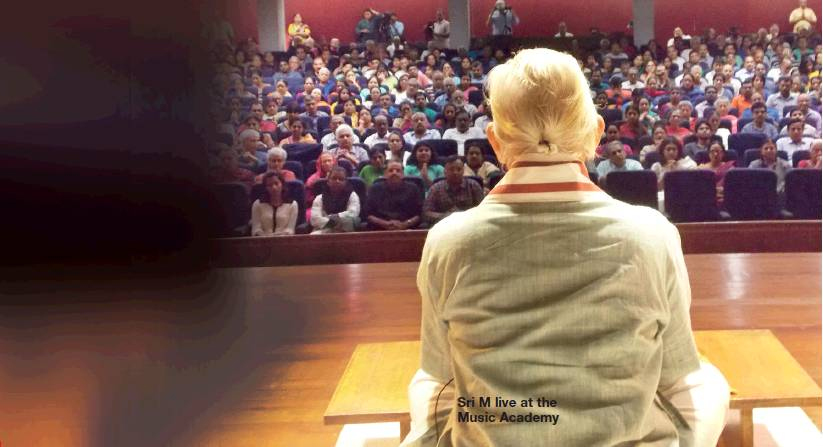 The music Season begins a month ahead at the Music Academy with songs of a different kind. A two day discourse held on the Bhagavad Gita by Sri M on Dhyana Yoga, the 6th Chapter of the Bhagavad Gita, saw a packed house.

Singer Shreya Ramnath invoked the chief guest of the talk, lord Sri Krishna, with a beautiful rendition of Krishna Nee Begane Baro and a selection of diverse, multilingual compositions.

Sri M read out each shloka, explained its meaning and made it relevant by placing it in today’s context. Introducing The Gita, Sri M said, “The fact that it is set by Veda Vyasa in a battlefield makes it a perfect example of how to live in the battlefield of day-to-day existence and go deep into the profound truths of Vedanta.”

“The Bhagavad Gita, is one of the most widely read scriptures in the world. After the Bible and works of Shakespeare, there is no text which has become so popular and read all over the world,” he added.

It is also one of the oldest texts known to offer different ways of looking at the truth, with 18 chapters, each an independent path and a yoga in itself. Sri M insisted that one can try to listen between the words for the music which it contains, for is meant to be sung, as is evident from the meaning of the word ‘Gita’ which means ‘song’.

The Gita starts with the definition of a true yogi or sanyasi. “What is Sanyasa or renunciation? It is action that tends towards selflessness. If someone says I don’t want to do any action, Krishna asks, have the hankerings of your mind settled? If not, don’t call yourself a renunciant. Till that takes place, it’s incumbent on us to do our work,” Sri M said. Stressing on the most important teaching of The Gita, Sri M said, “When pain and sorrow come, instead of sweeping it under the rug, is there a way to squarely look at it in the face and solve it once and for all?”

After all the preparations stated above, The Gita addresses the practice of meditation. “Solitude is what you make for yourself, not where you go in search for it. You can’t practise for one day and say ‘oh now nothing is happening’. Regular practice, if possible in a solitary spot, is necessary,” Sri M said, and added, “The Gita says that spiritual understanding is for the Brahmachari, which does not mean it is for the celibate but for one who is focused on the Brahman.”

With the mind restrained from going outside the yogi attains ‘nirvana’. Giving an analogy to describe this state Sri M said, “The mind of a yogi is like a lamp sheltered from the wind which does not flicker.”

So, when the mind is in that state of stillness, its movements completely stopped from practice of yoga, there is joy welling up. “When a yogi reaches the state where he understands that the supreme self is residing in all beings and all beings are residing in the supreme being, he also feels that if I’m causing harm to someone else, I’m causing harm to myself. In such cases jealousy and envy cannot arise.”

The Gita is a practical text. Arjuna asks questions that come to our minds, too. He tells Krishna that owing to the fickleness of his mind, there’s no way of establishing spiritual communion. It is so turbulent and unyielding that it appears that it is easier to control the wind than his mind.

Krishna says that the mind can be controlled by dispassion and regular spiritual practice, without admitting failure. “If you fail you will come back. Your bank balance remains. It’s not like a physical bank balance that if you are dead someone will come and take it off. A yogi is superior to a scholar because a scholar may know many things, but may not have found his inner self. He is superior to a ritualist, too. Therefore Arjuna, I want you to be a yogi,” Sri M explained.

“Krishna says to Arjuna that the greatest yogi is one who sees everything as his inner self. Who is completely absorbed in me and thinks of nothing else. Such a great one, I call the greatest of all yogis,” saying this, Sri M concluded the 47 shlokas of chapter 6 of the Bhagavad Gita.

Mumtaz Ali, also known as Sri M, is a spiritual guide, social reformer and educationist who was born into a Muslim family in Thiruvananthapuram, Kerala. He runs educational institutions (including free schools) and is committed to communal harmony and social upliftment. In 2015, he went on a 7000 km walk from Kanyakumari to Kashmir to bring people’s attention to one of the biggest problems of our time, violence in the name of religion.