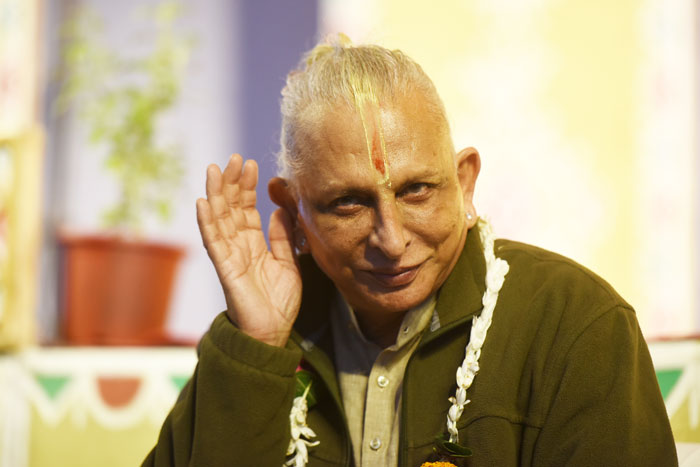 Since it is Janmashtami time, I’m going to tell you a story on Krishna and the path of devotion.

There was a little boy whose mother was very poor and didn’t know who the father was. So, the mother wanted to send him to a paathshala. There was no paathshala close by, it was very far and to go there, he had to clear a very thick forest with wild animals…but the mother thought, “Just because I’m poor I’m not going to not educate my son, he has to go!”

So one day she takes him through the forest, meets the teacher, the acharya.
He says, “Okay I’ll take him for free”. So, he’s admitted.

Now the problem is everyday he has to cross the forest. So, he says, “Mamma, today I have to go to the teacher but you’re not coming, I’m alone. What will happen to me? There are wild animals, I heard them the other day!”

So, the mother says to him — just to make him confident and not be afraid actually she doesn’t know. We tell such stories to kids, right? That’s why it’s always good to tell positive stories to kids, don’t talk to them about ghosts, poor fellows will be frightened all their lives even after they grow up. So, she says, “In the forest, in the deep forest there’s a little boy who lives there, same size as you, a little bit dark” — you know the Sanskrit word for dark? Krishna varna: Dark skinned — “and he also has some peacock feathers on his hair and sometimes he plays a flute, beautiful music. So, when you go in and if at all you feel frightened just close your eyes and say – ‘Hey friend come help me I’m frightened, and he’ll come.’ So, the boy says, “Okay, does he have a name?” This is supposed to be set in Kerala, so the mother says to him, “He’s called Unni” – means a little boy.

So, the child goes through the forest and then he hears the animals and gets frightened, and he shouts, “Aay! Unni odi vaa, come quickly because I’m very frightened…” So, a small boy actually comes with a peacock feather and a flute in his hand and says, “I’m here. Your mother told you right? I’m here. Let’s sit down”.

He plays the flute beautifully, he’s fully absorbed, then he says, “Hey it’s time for you to go now”. So, he walks him up to the edge of the forest, leaves him there and goes back.

This happens every day. Every day the boy comes back and reports to his mother, “Oh today he played the flute, oh today we played marbles, oh today…” and the mother thinks…laughing to herself, “I told him a story and he fully believes me. Poor fellow. Anyway, good! At least he’s going to school.”

So, one day, there is the birthday of the acharya, the teacher. So, everybody is going with different gifts. The boy doesn’t have anything to take…his mother doesn’t have anything. So, she gives him a small silver katori and a little bit of milk and says, “Take it but please remember this is the only katori I have in my house, give the milk but bring back the katori.” So, the boy says, “Okay.”

He goes again through the forest and hears the wild animal making noise and calls for his friend Unni.

He says, “Birthday of my teacher and I’m taking some milk in the katori”

“Eh! Come on give it!” Playfully he takes it from him and says, “Great milk! take it anyway and give it to him”.

So, they cross the forest and then he leaves him and goes away.

Boy goes to the teacher. There is a big line of people giving big gifts and he presents only this little katori and that also he has to get the katori back. All the students make fun of him, “Oh! He wants the katori back! Wow”

So, the Master says, “Okay doesn’t matter go get a bucket”. So, they bring him a bucket. He pours the milk into it and says, “Take your katori”.

Boy says, “But there is some milk here still.”

“Oh! okay pour it”. Goes on till the whole bucket is full and there is still milk in the katori.

So, the teacher gets very suspicious, and says, “What is this? Do you know magic? Does your mother know indrajaal or something?”

“No, No but something has happened. Can you tell us what, from the time you got it here, something must have happened?”

He said, “Nothing very significant. Aah! One…my friend a little fellow who lives in the forest, the dark guy, he tried to sip this milk that I know”.

Teacher gets very angry, “Why did you allow? and you’re giving to me..”

“But I don’t know he just snatched it from me, and I think he did something because I don’t know why this milk is not stopping”.

So that teacher laughs and says, “This fellow is a liar, he’s just lying, something is wrong here. There is no such boy in the forest, there’s nothing, he’s just lying”.

“Okay can you take me there?”

So, he brings the teacher to the forest with all the disciples following. They go there, and he shouts, “Hey Unni come, come, my teacher has come to see you, come!”

No sound, total silence, no boy, no Krishna, no nothing…no flute.

He gets very desperate he says, “They are calling me a liar, please come!”

Then there is a voice that comes from the sky: Aakashavani, it says, “These fellows are not ready to see me. You are ready to see me, you are so innocent and so clear of mind, so you saw me, these fellows they can’t see me. They’ll see me when they become clear and pure”