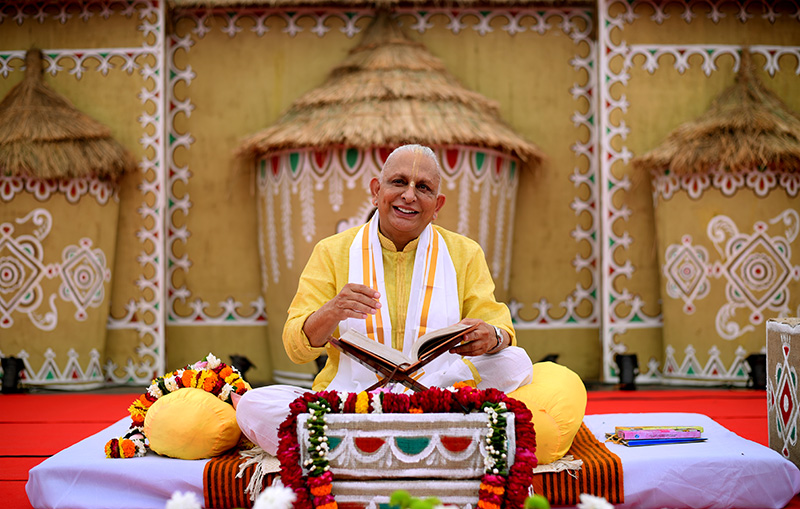 Krishna is depicted as dancing in Vrindavan with the gopis, going to war with Kamsa, helping Arjuna fight the battle of Kurukshetra where he assumes the role of a Guru in the Bhagavad Gita and becomes a Jagadguru.

The Keno Upanishad says – Yyadvācāanabhyuditaṁ yena vāgabhyudyate: That which cannot be expressed by speech, but by which speech is expressed-.  But sound can describe the greatest music and the most important sound is the pranava, Om and that is a link between you and That which is beyond your limited personality, Krishna, God or whatever you want to call it.

Look at this carefully – Krishna takes the flute and plays, we are fascinated and the gopis did not know where they were standing, they were looking here and there.  But would you be able to make music if the flute were solid?

I come from the Nath sampradaya. People have a misunderstanding that Nath sampradaya believes only in Shiva. it’s not like that, we believe that Govinda or the Supreme Being picks up the flute and plays on our sushumna nadi when it’s absolutely clean, music comes through the seven holes, the seven chakras in the system. That’s our understanding. You don’t have to believe it; you can say he’s playing in Vrindavan and listening. But if you are really listening like a gopi, then you have no selfishness at all, and you enjoy the music.

So therefore, having said this, I’m now going to tell you a short story.

This is a story about how — you know Krishna goes off to Dwarka and he’s staying with Satyabhama and his other wives. They are looking after him constantly and yet when he sleeps, in his dream he keeps recalling the gopis, Radha! So, Satyabhama is a little bit irritated – What is this? We are looking after him and he is still thinking of those gopis, the cow-herd girls in Vrindavan, what’s the matter with him?

So, in this whole drama Krishna, who is considered to be a purna-avatar, does all kinds of antics. He pretends to have a terrible stomach-ache. All the vaidyas come and check him out and they said – No cure!

Then Narada comes. And you know when Narada comes, what happens! He’s a wonderful figure in the epics, “Narayana, Narayana”. He appears with his veena and pretends to be a great physician, takes his pulse and all that.

He asks Krishna, “So what do we do now? I’m asking you, because it’s your disease and you know how to cure it. I don’t know what to do”.

Can you imagine giving the dust of your feet to God! You’ll go to hell a hundred times. So, neither Satyabhama, Rukmini or anybody else is ready to do this.

Krishna says, “If you can find this then I think my stomach-ache will go. Otherwise there’s no way out”.

Narada says, “Alright, let me try. I’m travelling all the time.” So, after repeating the name of “Narayana, Narayana” he disappears. He’s an aerial traveller and he lands in Brindavan.

As soon as he landed in Vrindavan, the gopis saw him and came running to him. They said, “Narada, where are you coming from?”

He says, “I’m coming from Dwarka”

“Dwarka! So, what is our little fellow Krishna doing there?  We are kind of lost here, there is nothing in our hearts now, gone. He’s gone , stolen our hearts and ran off to…Dwarka!

Narada said, “But listen, I want to tell you”

He said, “Krishna has a terrible stomach-ache.” and so they get very worried and ask, “Is there no medicine to cure him?”

He said, “ There is a medicine, nobody is willing to do that.”

“What is this medicine?”

Gopis say, “There is nobody in Dwarka who can do this? The most important thing is to get rid of his stomach-ache. We can’t bear him suffering!

Here!” All the gopis dust their feet and Narada gets one sack full of dust from their feet. He takes it on his back and flies back to Dwarka and then empties the sack and says, “Here I’ve brought it”.

So, Krishna looks at Rukmini and Satyabhama and takes a pinch and puts it in his mouth and says, “Ah! That’s so sweet!”

He says, “My stomach-ache is gone”

You know what it means – I don’t care for myself, I only care for the Lord. Who cares now what will happen to me!

This is the highest level of devotion where the only thing you want is the Lord and nothing else. If this becomes the height of devotion, it’s not different from Vedanta where all that the Yogi, aspirant desires is the supreme reality, nothing else, everything else is illusion for him. There’s not much difference except in the approach. The most important thing is that the instrument from which the music of the Lord comes is empty and clear, from ego that we carry.

Wish you a very Happy Janmashtami.