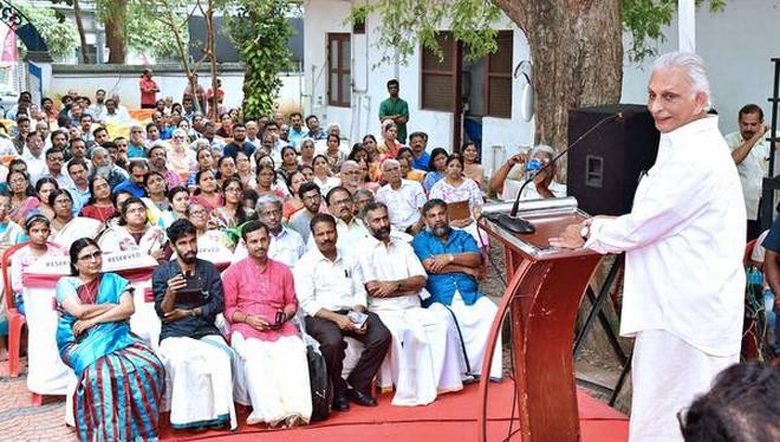 The Hindu reports on Sri M’s visit to Thiruvananthapuram.

Swami Vivekananda’s life and times unfolded before the audience as spiritual guru Sri M spoke of the activist-seer of the 19th century who is known for his teachings on Vedanta and his revolutionary views on social reform.

It was 125 years ago that the Swami visited Kerala during which he made the famous remark on the State being a lunatic asylum after coming to know of the rigid caste structure that was prevalent here then. Commemorating that visit, a seminar was organised on ‘Vision of Swami Vivekananda and contemporary India,’ as part of Vivekanda Sparsham, a Statewide programme. Speaking at the seminar at Bharath Bhavan here on Wednesday, Sri M observed that Swami Vivekananda was unique because he was the first to popularise Indian traditions to the western world.

The Swami had a prolific scientific mind that saw unifying threads in religion and humanity at a time when they seemed to be different concepts. His call was to seek divinity in every human, Sri M said. He was a proponent of religious socialism and a source of inspiration for many, including noted freedom fighters. The seminar, jointly organised by the Kerala Bhasha Institute and Bharath Bhavan, was held on December 13, the same day Swami Vivekananda arrived in the capital 125 years ago. For the contemporary India that sees a rise in superstitions, Sri M’s message was to read the collected works of Swami Vivekananda to dispel such tendencies.